With competition across 13 categories, the 2015 LEDs Magazine Sapphire Awards program features the best in solid-state lighting technology ranging from the enabling technologies used by product developers to the finished products that serve the broad general lighting application space. 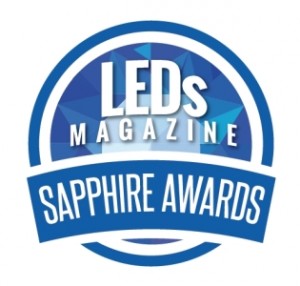 LEDs Magazine has announced the finalists in the inaugural 2015 Sapphire Awards program for both enabling technologies and lighting products in the solid-state lighting (SSL) sector. The recognized products were selected by panel of judges representing a broad cross-section of the LED component and lighting industries. Winners will be announced at a Gala to be held Feb. 25, 2015 in Las Vegas, NV in conjunction with the Strategies in Light and The LED Show co-located events.

Entries to the Sapphire Awards program were accepted throughout the fall of 2014. The first-year program received well in excess of 100 entries. The judges selected three to four finalists in each of 13 categories. Ultimately, all entrants will receive a score of one to five Sapphires for their entry with the top scorers among the finalists receiving Sapphire Awards at the Gala.

The Gala will be a can’t-miss event during Strategies in Light week with exciting entertainment booked for the event that will be held in the Sands Expo & Convention Center. The festivities will culminate with celebration of the Sapphire winners.

The finalists in each of the 13 categories are identified below. The final category, Illumineer of the Year, will recognize a person, or team of people, for development of an especially innovative LED-centric or SSL product during the course of the year. For more information on the Sapphire Awards program, see our dedicated website.

As posted on January 21, 2015 on ledsmagazine.com by Maury Wright, Editor in Chief, LEDs Magazine and Illumination in Focus