Home/News/Ellwood City cleans up at manufacturers’ awards
Previous Next 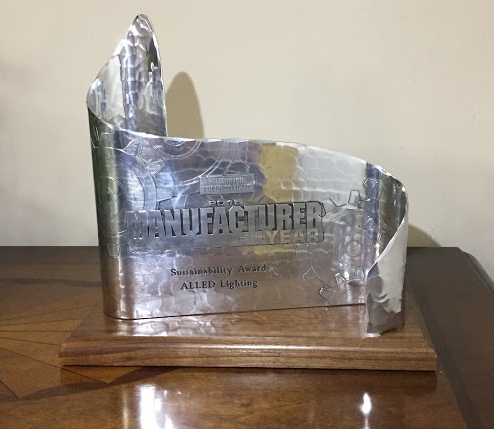 FRANKLIN TWP. — When the Liberty Bridge in Pittsburgh caught fire on Sept. 2, commuter traffic was thrown into chaos.

And Hall Industries was thrown into action. The Franklin Township-based manufacturer, which fabricates steel fixtures with an emphasis on the airline and bridge industries, manufactured reinforcement plates to repair the span.

“We worked seven days a week, 24 hours a day to make sure we got the product out the door,” sales engineer Scott Donley said.

The bridge, which spans the Monongahela River and is a main traffic artery to Pittsburgh’s southern neighborhoods and the South Hills suburbs, was closed almost the entire month of September. If not for the efforts of Hall Industries, it might have been shut down even longer.

Because of the company’s work on projects such as the under-pressure Liberty Bridge repairs, it won a Pittsburgh Business Times Manufacturer of the Year Award in the Large Employer division, for companies with between 51 and 99 employees. Hall Industries also was a finalist for the Premo J. Pappafava Family Business Award.

The Ellwood City area had a good night at the Pittsburgh Business Times awards earlier this month, with Wayne Township-based Alled (Appalachian Lighting) winning the Sustainable Manufacturer Award. Alled also was a finalist in the small manufacturer category, for companies with fewer than 26 employees.

Alled is regarded as one of the world’s top manufacturers and innovators in the institutional LED lighting field. The company replaces conventional streetlights, parking lot lights and warehouse fixtures that consume a fraction of the electricity of traditional devices. Additionally, said Kate Wassel, regional director of operations, Alled’s devices are more durable than the lighting they replace.

Founded more than 50 years ago by Harold Hall — who still works regularly with the title of President Emeritus at the age of 92 — Hall Industries relocated to Ellwood City in 1975.

The company splits its efforts — almost on a 50-50 split — between fabricating steel pieces designed by other businesses, and manufacturing their own fabricated parts, principally for bridges and the airline industry. In the Ellwood City area, the company has facilities in the Casey Industrial Park and along Second Street in Ellwood City.

Mark Hall said Hall Industries has, since Harold launched it, tried to maintain a diverse range of services, in part so that the temporary or permanent collapse of one customer base doesn’t pull the company down with it.

That principle has proven crucial. After the Sept. 11, 2001, terrorist attacks, the airlines, previously reliable customers for Hall Industries, retrenched.

“Aviation not only stopped, it dead stopped,” Mark Hall said. “But becasue we had transit and bridges, other things we could do, it really saved our bacon.”

Its previous projects have included the factory lights for the General Motors manufacturing plant in Lordstown, Ohio, and the streetlights for the city of Welland, Ontario.

Alled’s pilot project was the installation of streetlights in Ellwood City, with the initial work carried out through a state grant. The borough used savings from reduced electricity use to fund subsequent streetlight replacements. All of Ellwood City’s streetlights have been manufactured by Alled.

The company is setting worldwide standards for energy efficiency. In one of its recent projects at the Mike Kelly auto dealership in Butler County, Alled installed lights that used 168 watts to provide 1,000 watts of illumination. The dealership is now using as much electricity in its entire lot as it did on a single fixture before the change.

“There’s not really anyone else I know that can drop wattage by that amount,” Wassel said.

With the Kelly project, Wassel said the company was also able to provide lower maintenance costs because the LED devices have a greater lifespan than conventional lights.

More recently, Appalachian Lighting has been looking for new projects. Wassel said the company has been in discussions for streetlight projects in West Coast cities.

Steel fabricated at Hall Industries made up the bridge’s railings and the drainage system that carries water off the bridge deck down to the Connoquenessing Creek. Alled installed the streetlights that line the span and illuminate it at night.

Mark Hall said his company has tried to be good local citizens, and Ellwood City has returned the gesture.

“We’re appreciative of everything that Ellwood City has offered us,” Hall said.

As posted on December 11, 2016 on ellwoodcityledger.com by Eric Poole