ALLED Lighting Signs Fifth Dealership in Less Than One Year

ALLED Lighting Signs Fifth Dealership in Less Than One Year 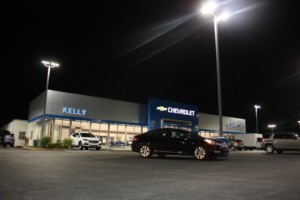 Ellwood City, PA: As of April 1, 2017, ALLED Lighting Systems has officially signed five dealerships to convert their old, outdated Metal Halide fixtures to the ALLED APL5 fixture. After several failed attempts at landing dealership projects, a pilot project was created to give one ‘lucky’ dealership the chance of a lifetime. Let ALLED prove that their APL5 (area and parking) fixture can replace a 1000-watt Metal Halide with 168 watts for four months – should the customer be unhappy, ALLED removes the lights at no cost and should the customer be happy, ALLED completes the sale upon signed agreement. This pilot was deemed as huge risk by many in the industry, however after a few months, a dealership accepted the offer and was ready to see what ALLED lighting fixtures had to offer. The pilot project took place in the summer of 2016 at Mike Kelly Automotive in Butler, Pennsylvania. The dealership is now saving roughly 80% on energy costs (including lighting/maintenance). Since this project, ALLED has been unstoppable in the car dealership market.

Mike Kelly Automotive General Manager, Michael Lee, stated, “It looks absolutely wonderful! The lights are low profit, extremely bright and are energy efficient”. The dealership had faced high maintenance bills due to the old fixtures being unreliable and outdated. This is a similar characteristic among all dealerships ALLED has come across. Until now, there really has not been a true solution to the very-bright and energy-sucking Metal Halide fixtures in a car dealership car lot. Since highlighting this pilot project, ALLED has since signed four additional dealerships to convert their parking lot fixtures to ALLED LED.

Another added benefit to these retrofit projects are the fact that ALLED works directly with the customer to ensure they are getting the highest power utility rebate after the completion of the project. In the case of Mike Kelly Automotive, they received over $10,000 just for converting all sixty-four lot fixtures to ALLED. Many other dealerships in the area have received the same, if not more, rebate monies after the retrofit projects.